On 16th May 2011 Client A came in for a biomechanical gait assessment. Previously, this client had been to physiotherapy, but the problem still persisted with prolonged periods of activity, specifically running.

On initial assessment, Client A presented with medial knee pain on the right side. They had been prescribed orthotics for plantar fasciitis 2/3 years previously, and wore them religiously in their running shoes. These were high arched medial support orthotics, designed to control over pronation and raise the medial arch.

The biomechanical assessment consisted of a series of running trials performed in barefoot, trainers and orthotic conditions. Results from the assessment indicated the patient had a tendency to adopt a varus (adducted) position at the knee joints during running. This was consistently worse in orthotics compared to barefoot and trainers. During barefoot running, knee varus was <6.5o, whereas running trials performed in the orthotics caused the knee to assume a varus position <11o. 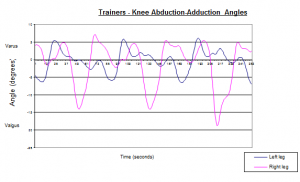 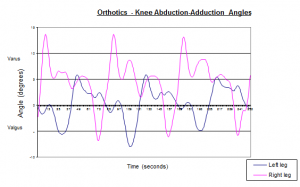 Graphical representation of knee varus-valgus angles in trainers and trainers with orthotics.

It was therefore suggested that, in combination with physiotherapy to maintain physical functionality, orthotics would be slowly reduced and possibly removed. Additionally, if the problem were to persist, the lateral forefoot would be stabilised.

Since then, Client A has been able to run pain free, and is now running with no orthotic intervention.

See our Biomechanics and Gait Analysis service for more infomation about out state of the art Vicon Motion Capture System which analysisthe internal biomechanics during walking and running.

No comments yet. You should be kind and add one!